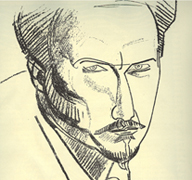 Ezra Pound (1885-1972) is generally considered the poet most responsible for defining and promoting a modernist aesthetic in poetry. In the early teens of the twentieth century, he opened a seminal exchange of work and ideas between British and American writers, and was famous for the generosity with which he advanced the work of such major contemporaries as W. B. Yeats, Robert Frost, William Carlos Williams, Marianne Moore, H. D., James Joyce, Ernest Hemingway, and especially T. S. Eliot.

His own significant contributions to poetry begin with Imagism, a movement in poetry which derived its technique from classical Chinese and Japanese poetry. It stressed clarity, precision, and economy of language, as well as abandoning traditional rhyme and meter in order to "compose in the sequence of the musical phrase, not in the sequence of the metronome." Pound's later work, for nearly fifty years, focused on the encyclopedic epic poem he entitled The Cantos.

Pound was born in Hailey, Idaho, in 1885. He completed two years of college at the University of Pennsylvania and earned a degree from Hamilton College in 1905. After teaching at Wabash College for two years, he travelled abroad to Spain, Italy and London, where, as the literary executor of the scholar Ernest Fenellosa, he became interested in Japanese and Chinese poetry. He married Dorothy Shakespear in 1914 and became the London editor of the Little Review in 1917.

In 1924, he moved to Italy; during this period of voluntary exile, Pound became involved in Fascist politics, and did not return to the United States until 1945, when he was arrested on charges of treason for broadcasting Fascist propaganda by radio to the United States during the Second World War. In 1946, he was acquitted, but declared mentally ill and committed to St. Elizabeths Hospital in Washington, D.C. During his confinement, the jury of the Bollingen-Library of Congress Award (which included a number of the most eminent writers of the time) decided to overlook Pound's political career in the interest of recognizing his poetic achievements, and awarded him the prize for the Pisan Cantos (1948). After continuous appeals from writers won his release from the hospital in 1958, Pound returned to Italy and settled in Venice, where he died, a semi-recluse, in 1972.