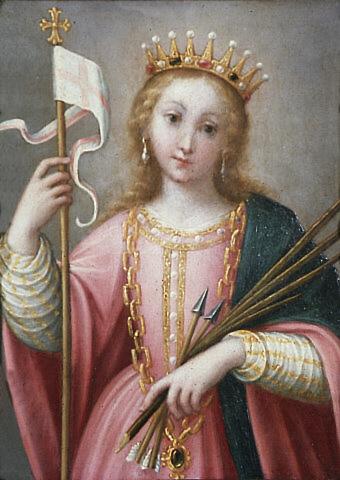 A British Christian saint. Her feast day in the extraordinary form calendar of the Catholic Church is October 21. she was a Romano-British princess who, at the request of her father King Dionotus of Dumnonia in south-west England, set sail to join her future husband, the pagan governor Conan Meriadoc of Armorica, along with 11,000 virginal handmaidens. After a miraculous storm brought them over the sea in a single day to a Gaulish port, Ursula declared that before her marriage she would undertake a pan-European pilgrimage. She headed for Rome with her followers and persuaded the pope, Cyriacus (unknown in the pontifical records), and Sulpicius, bishop of Ravenna, to join them. After setting out for Cologne, which was being besieged by Huns, all the virgins were beheaded in a massacre. The Huns' leader shot Ursula dead.