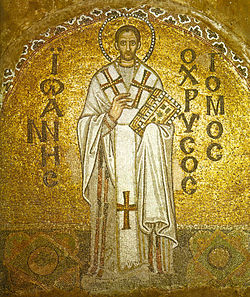 John Chrysostom (c. 347–407, Greek: Ἰωάννης ὁ Χρυσόστομος), Archbishop of Constantinople, was an important Early Church Father. He is known for his eloquence in preaching and public speaking, his denunciation of abuse of authority by both ecclesiastical and political leaders, the Divine Liturgy of St. John Chrysostom, and his ascetic sensibilities. After his death in 407 he was given the Greek epithet chrysostomos, meaning "golden mouthed" in English. This was eventually Anglicized to Chrysostom.