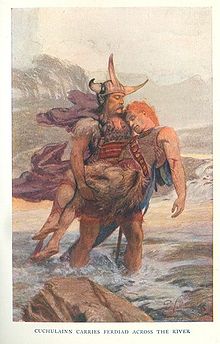 Ireland’s “Heroic Age” is recorded  in The Ulster Cycle, which is one of the four great cycles of Irish mythology. It is a body of medieval Irish heroic legends and sagas of the traditional heroes of the Ulaid in what is now eastern Ulster and northern Leinster, particularly counties Armagh, Down and Louth. It is traditionally set around the time of Christ, and most of the action takes place in the provinces of Ulster and Connacht. It consists of a group of heroic tales dealing with the lives of Conchobar mac Nessa, king of Ulster, the great hero Cú Chulainn, the son of Lug, and of their friends, lovers, and enemies.These are the Ulaid, or people of the North-Eastern corner of Ireland and the action of the stories centres round the royal court at Emain Macha (known in English as Navan Fort), close to the modern town of Armagh. The Ulaid had close links with the Irish colony in Scotland, and part of Cú Chulainn's training takes place in that colony.

The cycle consists of stories of the births, early lives and training, wooings, battles, feastings, and deaths of the heroes and reflects a warrior society in which warfare consists mainly of single combats and wealth is measured mainly in cattle. These stories are written mainly in prose. The centrepiece of the Ulster Cycle is the Táin Bó Cúailnge. Other important Ulster Cycle tales include The Tragic Death of Aife's only Son, Bricriu's Feast, and The Destruction of Da Derga's Hostel. The Exile of the Sons of Usnach, better known as the tragedy of Deirdre and the source of plays by John Millington Synge, William Butler Yeats, and Vincent Woods, is also part of this cycle.
This cycle is, in some respects, close to the mythological cycle. Some of the characters from the latter reappear, and the same sort of shape-shifting magic is much in evidence, side by side with a grim, almost callous realism. While we may suspect a few characters, such as Medb or Cú Roí, of once being deities, and Cú Chulainn in particular displays superhuman prowess, the characters are mortal and associated with a specific time and place. If the Mythological Cycle represents a Golden Age, the Ulster Cycle is Ireland's Heroic Age