The "Sidhe," (pronounced "shee"), sometimes referred to as "aois si," are a supernatural race in Irish and Scottish mythology comparable to the fairies or elves. They are said to live underground in fairy mounds, across the western sea, or in an invisible world that coexists with the world of humans. This world is described in the Book of Invasions (recorded in the Book of Leinster) as a parallel universe in which the aos sí walk amongst the living. In the Irish language, aos sí means "people of the mounds" (the mounds are known in Irish as "the sídhe"). In Irish literature the people of the mounds are also called daoine sídhe. in Scottish mythology they are daoine sìth. They are variously said to be the ancestors, the spirits of nature, or goddesses and gods. 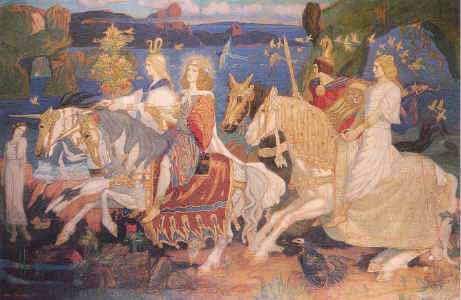